Before the Zelensky Crapola, I wrote about the old Russian-Empire (before the NAZI's), and that literature, philosphers and authors were once very influential in Europe. I feel like a "living" broken record whenever I think about anything. If it were 1890, and Tzar Alexander the Great was living in that big giant builing in Red-Square in Moscow, you probably wouldn't be nearly as familiar with your favorite Rock-Band as you would with which philosopher seemed most influential at that time. But, as Fox & CNN have made painfully obvious with this latest incarnation of Russia Gate (this time masquerading as "Liberate Ukraine") - we don't live in Europe, and it isn't 1890 anymore, it is 2022.

Here, in the United States we had a different type of artist altogether "rose up" - the musician.


Now, the music movements of the 1960's, and the 1980's were big. I was alive for one of them. The one that "sort of" started with You Tube under Obama wasn't nearly as big, and definitely not as load, and of course a lot less inspiring. I mean, take a look at this guy: 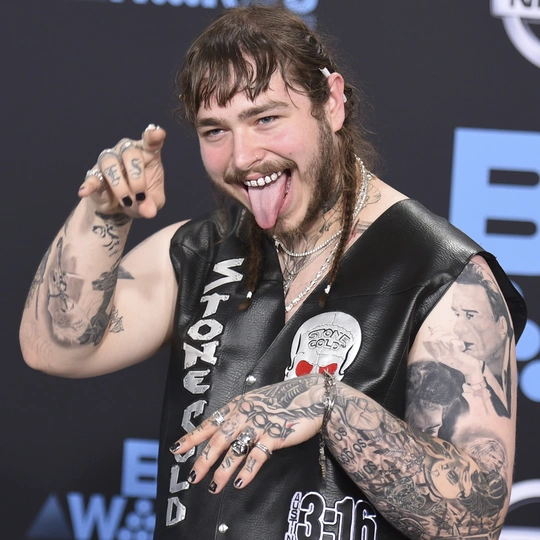 I happen to know who that is because "the dudes" at "The Department" here in Dallas have had many animated conversations with me, about him. You can read about the guy (Post Malone) on the Wikipedia Page Link. He's not just some clown joke on the Internet, because he had the most You Tube Views in 2019 and 2020 or something like that. This one was alright. Some of the videos listed, right now, have more than 1 Billion Views. I'm not trying to promote this guy; and then there is this one which has the really bizarre, but dreamy sound.

There's so much to say in this little blogger window. I'm going to start with the types of animated conversations that NDBC likes to have with me. I don't know how to explain what I mean by "conversations with the department of mind-control." I just don't. To me, there is nothing more obvious in the world than to say that I can be forced to stare at images inside my eye-sockets - images that aren't present in the room where I'm sitting, standing or laying. I have been through this for too many years, and was called an enemy-combatant and a terrorist for much of the later Bill Clinton Administration, all of George Bush, and much of Obama's first term. In a nutshell, my 20's and 30's were a total joke to me, because I was being hypno-programmed.

When 'The Voices' and 'The Images' are psychologically conditioning me, one of their favorite Content-Topics was that freak-of-nature (Post Malone)


So, no, I'm not a "Post Malone" fan, but, to me, I feel like I have a ton of explaining to do regarding why on earth I would be mentioning this guy at all. Particularly if I don't like him, why not put the weirdo out of your mind, and take a walk or something. First, I have tried to explain that I sit in front of a computer for hours and hours, and do sort of what a court-room-stenographer does, but instead of court-room evidence, it is Java Software I'm typing. It bothers me a lot that I cannot make any day-to-day decisions about what modules or functions I'm going to write or debug. It bothers the hell out of me. Generally, the people at "The Department" come up with a list of things for me to write or fix each day, and I can spend anywhere from 4 up to 15 hours in front of a computer writing Java, HTML, CSS, or even Java-Script. The important point, being though, I'm staring at an Internet Browser for hours and hours a day. What this means is that terrorizing me with what other links I'm supposed to follow is the easiest thing in the world for Mind-Control Software to do to me!

Today, for instance, I was awake at 4:30 A.M., and I'm not going to explain why. By 4:45 A.M. I had my cute-little Google Cloud Server Theia Shell opened, and was adding yet another major module to my library. I did manage to eat as much as I could. I exercise outback as often as I can. I wound up working from around 4:30 A.M. straight until 2:30 P.M. which is about 11 hours of solid software-engineering. The work mostly feels like being "a watchmaker" as I'm always staring at tiny little moving pieces that need to push each-other. Computer-Science doesn't feel anything like the "purse science" or the empirical methods. Empiricism was also a Nineteenth-Century View about Science- where trying to find equations, formulas and tables which align with "The Truth" as it is measured in the real world. The Russians invented the Periodic Table of the Elements with Empiricism, and much of the Laws of Electricity & Magnetism too.

Now, today, I was sitting there, and by 9:00 A.M. one of the "notices" popped up in my brain. This one was about a 1971 band named 'The Free Design'. Apparently they were a family, from somewhere in Western, New York near Syracuse. I had probably heard of them, but had totally forget when I started reading about them this morning. Their songs are on one of the T.V. Commercials that I have seen. I wouldn't have thought of the song in a million years, if not for the cute voice that was singing to me while I was trying to write.

I'm going to include these lyrics from the song below, because the Biological Part of my Brain is just to easily manipulated, and I really couldn't get the song out of my head, after "they" played it:

Ok, so the point I try to reiterate, over and over, is that remnants of the "one great" United States have this faux de-facto government that silences political-dissidents using Biological-Electrical "Secret Weapons". Again, and again and again - I feel like a broken record about it all! There are a lot of things that "The Software" can influence you to do. Through repetitive posing of auditory and visual stimuli, a man can be conditioned to be somebody who really enjoys going to the Race-Track Gas Station and buy some brand of snack, tobacco or alcohol product. One thing that generally does not happen though the power of Mind Control, is turning somebody into a talented and world famous musician. Yes, Post Malone probably has several billion views, but this is the United States, and the barrier for success was attackd to the point that a complete freak of nature is more popular than ... well .... I don't know who should be more popular than him - because to me the music movement really seems dead.

Bio-Electric Weapons can make people very angry, and even very crazy when "The Department" works at it.


They clearly did for Post-Malone! But, they have made me crazy too, many times. If this 18 year old kid in Uvalde, Texas was one of the thousands - or millions - of people in Texas living with this Electronic-Hardware in his body, wouldn't you say that the United States Government is at fault for this shooting? Why is nobody asking this question? If you were directed to this page, you probably live with implants too. This means you know EXACTLY what is going on.
at May 26, 2022