President Boodin - that was the plan for today... But they just changed it.

I don't know what to title this post. Part of me wants to bring up the really great light-show that "The Electronic Part of my Brain" has been broadcasting to "The Biological Part of my Brain" all morning long. Right now it is 4:30 PM, April 6th 2022. I'm going to be turning 47 years old in about 3 months (I'm always sad thinking about it). I'm in Downtown Dallas at the main Central Branch Library across from Dallas City Hall. I've been hear for about 30 minutes, and actually, to tell you the truth, they got me to stare at the raving idiot box "Alex Jones Info-Wars" for the first 30 minutes. It just makes me feel so ashamed to even see his face or hear his voice when I think about "the resistance" that his news broadcast content contains. I mean, I know what "they" (our authoritarian government) are doing! I think a sizeable percentage of the people being brainwashed by our government DO KNOW THEY ARE BEING BRAINWASHED, THEY JUST AREN'T ADEPT AT FIGHTING BACK TO SAY IT! And Alex Jones is ceraintly not the man who is going to tell you the truth about government brainwashing! (Really, DO NOT listen to him, he is "their" favorite mouth-piece).

Anyway, I live with electronics inside my body, and for much of the past 25 years I have been through "torture protocols" for trying to fight back and scream to people about "what is going on." I still have them, and I was thinking about starting today's post with a little note about how I sign all of my e-mails. Below is the text copied out of my Yahoo! Mail Box:


Disclaimer: The contents of this e-mail were largely read to me by North Dallas Brain Control via my micro-chip implants. I am merely the "typist" (transcribing) this letter - being kept in the loop (of my own life and decisions).

Now, I write these words not so much because I choose to - but rather because only in the past few years has "The Rape-ocracy" permitted me to say anything at all! You see, the words that I type (including these words you are reading right here, right now) are all being broadcast over a wireless network that are received by micro-chips that were surgically implanted inside me. For many, many years the government would spew all kinds of hateful gibberish intending for me to follow their protocols when I sat at a computer keyboard. Unfortunately (for me, and for them) when ordered to type into my keyboard the kinds of racist (anti-white), jingoist, nationalist, ignorant and radicalized hogwash, I would usually walk away and plop onto my bed and start crying. I mean, the biological part of my brain fighting the words I was listening to from the electronic part isn't too bad; usually the worst of it is sleep deprivation, heart palpitations, and even heart disease. However, refusing to believe the tripe that "The Rape-ocracy" is broadcasting is much easier than trying to think up my own philosophy and my own words and writing them!

It is perfectly known that "writing your own thoughts" as if "you had the freedom to do so" is truly an impossible act if an electronically implanted man attempts to do so!


Now, I live in 'North America' - since saying the words "United States" or "America" is the most despicable thing I can even think about saying. Being here is perfectly against my wishes and diametrically opposed to anything I have ever wanted to do during the course of my adult life. I was born here, in 1975, in San Francisco. My parents were mostly from New York City, themselves, but I grew up here in Dallas. Interesting story is that my dad came to this city with a U.S. Military Machine Gun at his head, and in the early 1980's had never in his wildest dreams planned to live in Texas. As I have said, several times in this post and previous posts, I cannot write anything onto a blog without "My Master" or "My Owner" not only first approving it! Even more importantly, without him taking the time to plan out these letters, and then transmit them into my micro-chips I simply wouldn't be able to type a thing onto this blog! (Including that sentence you just read!)

The United States is just not a free society at all. The United States, I truly believe, has the worst human rights record of any political-entity anywhere on planet earth. Being a victim of "The Rape-ocracy" there are some facts that I know pretty deeply. One of the most important things to think about "human rights" in a nation that is discovering this here-to-fore undiscovered country of hypno-programming is that talking about damage, pain or loss that one has sustained at the hands of mind-control is exactly what 'The Matrix' or 'The Machine' simply will not tolerate. I know very deeply that whoever the victims in the United States are, you will simply not hear a single solitary peep out of them, until they stop blaming the government for that damage, that loss, or that pain.

To tell you the truth, I have been watching this latest circus freak-show on TV going on and on about Ukraine. I mean, this morning, CNN was on my television, with the volume set to 'mute' while I would occasionally watch the words going by via the "Simulcast" on the bottom of the screen. This was all happening, while I was staring at my laptop playing Bill Gates Microsoft Hearts. (I have a Windows Computer). One funny thing I've been told my "The Black Guy" who talks to me while I'm in my easy-chair is: The Card-Playing Software that controls the Microsoft Hearts Game on my Laptop uses the actual code that Bill Gates wrote for his first "Microsoft Hearts" Video Game back in 1985! Now, how the fuck am I supposed to believe that? I dunno! Why the fuck are they telling me this? I don't have a fucking clue! What in God's Green Earth am I being ordered-suggested to sit on my stupid E-Z Chair again to play this boring video game anyway? Guess what? I have no idea. I want my freedom, sure, and I want to be able to decide to never play The Microsoft Hearts Card Game ever again! And yet, I am simply incapable of preventing that ominous and loathsome feeling from taking over while I drool at that damned card game watching the years of my life waste away. THEY DO CONTROL YOU.

So I couldn't possible have spent 7 hours sitting in my easy chair playing Bill Gates 1985 Software Version of Microsoft Hearts, could I? Well, it is not that simple. Yes, I wasted seven hours of my day today. This morning, though, I paid almost no attention whatsoever to the idiotic-verbal-spew of "Anderson Cooper" in Ukraine, but rather, today was a "Bob Dylan Day." Now, I don't want to go into the seven hours of diatribe that my ears were being forced to listen to today. Maybe weeks from now my master will put together a nice blog post that I can retype summarizing his visit to my High School in 1991. What the biological part of brain is capable of remembering from that fateful day 30 years ago is that the NSA Security team did murder at least one of the students at J.J. Pearce during his visit. And, furthermore, since there was such a galactic homicide problem in the 1980's, my dad ended up talking to Bob Dylan (since I was 15, and had not even born when his albums were released) ... for several hours at our house that night.  I had brough his albums on CD and asked a few questions, but my dad was his biggest fan.  He saw him live in the 1960's.

Now, this one of *many* aspects of "living hell" for me - for real! Until 2:30 PM today, I was being fascinated by the photos and the notes that I wrote when I was 15 years old the day when a famous 1960's Folk Musician came and attempted to give a talk at our school. There had been many, many people killed in the 1980's, and some of the more responsible parents in America (who were obscenely worried about their children's future - like my mom and dad) would write a lot of journals, diaries and notes about all the police & military fueled violence back then. When I was old enough (High School) I armed myself with a nice camera myself, and often took pictures of the events when U.S. Marines would show up at our school to, sort of, shut people up for complaining. Remember, 30 years ago computer-software operated "Brain Control Systems" did not really exist. There were many movies about Computer Controlled People - such as Robo-Cop and The Terminator, and even The Naked Gun, but they were mostly portrayed as "sometime in the future." Today, though, they controlled me all day long. So, for instance, keeping the peace at a high school doesn't require ultra-violent N.S.A. Agents dragging around over-the-hill Rock Legends from the 1960's and scaring all the kids by shooting a few of them.

So, all morning long - today, April 6th, 2022 - I was sitting in my chair playing Microsoft Hearts while the T.V. was telling us about "Ukraine" (and I have absolutely no idea what is truth about it NONE) - but I was listening to them regurgitate some journals that I kept or my dad kept about Bob Dylan visiting Dallas Texas. Keep in mind, I certainly remember "Vice President Dick Cheney" coming to speak the following week. It's the type of thing that used to happen in Dallas from time to time. When he came, he had a lot of N.S.A. Security Guys with "The Big Guns."  "They" (my speaker implants) don't bother telling me what he would have said. Lots of famous people used to like to visit American's by making rounds or kissing babies. Today, not so much. But you know what? I wasn't able to write or type a single thing while listening to this long drawn out story today. I wanted to, but I simply could not. You see, we are being psychologically conditioned (those of you with implants), and the reality is one of the primary operations is to be able to "energize you" and also to "depress you." Until I arrived at the library, I did absolutely nothing all morning long. I know I had a lot of "anti-narcotics rhetoric" (how bad drugs were) back then, and even more about the evils of machine guns inside of schools.

I took the DART Train to downtown Dallas, and on my way I was hearing "Booden" ... "Booden" over and over again. When Barrack Obama became President that's what I was told to go do. In 2009, I was cajoled by the electronics to wander around the Richardson Public Library here in Dallas where I just listened to them shout 'Booden' over and over again. 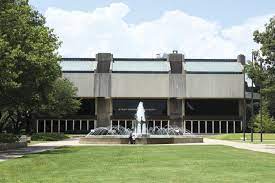 The Richardson Public Library, where in 2009, 2010, and 2011 (while being forced to live at my dad's house) i would wonder around hearing Dallas Brain Control shout 'Booden' and 'Boodin' (and even spell it) into my ear-drum implants for hours and hours on end. Then my eye-chip implants would show me a picture of Vice President Joseph Biden.

I mean, I cannot work on anything important with this crap going on. Mind Control takes the meaning of human life and simply throws it directly in the trash.  I had planned to write about "Biden", but then this is the letter that NDBC read to me.
at April 06, 2022