Part III: The Angel of the Morning: "Sabotage", "An Azore" A typical day in the U.S.A.

A few moments ago, I was "thinking" my own "thoughts". It has happened every day of my life for the past twenty-five years. Today at 4:00 A.M. I was actually allowed to sleep, and I didn't get up until 8:00 today. The slave traffickers at North Dallas Brain Control greatly prefer to save their cruelest thought-broadcasts for anybody who ever believed he was going to be important in U.S.A.; anybody whoever tried to depict or describe what education and learning really are - and specificly put a definition to "what is ignorance" without mentioning people with black-colored skin. Today I was awoken with the usual litany of thoughts including running through the library where I do my work shooting and karate-chopping all of the black police officers (both at the library, and on my way to the library) that grunt and snarl at me every time they (or I) walk by.

Just a second ago before typing today's "Ball of Sunshine" I was drinking coffee and trying to guestimate if I was going to be "encouraged" to write my Java Software for language translations today. I know how to write software. My first program was in 1983 at my mom's house when some "man" barged into our home (whom none of us had likely ever met) to give us an Atari Video Game System. I copied a "Hello World" Program and distinctly remember re-typing all of the comments too (the lines of code that don't matter) - and being only eight or nine years old, spent almost an hour typing it. This morning, hoping my brain (a.k.a. "me") would be fed the lines of code to grow my Foreign Language Translation Software Project, I started hearing one of "their" favorite songs in my head: The 1995 "World Famous" Beastie Boys song "Sabotage." (It wasn't very popular... music died off quickly in U.S.A after Nirvana and Kurt Cobain's "Grunge Movement").

I don't particularly care for the fucking thing, but sitting at my laptop on this nice 60 degree day, looking out of the Window, I see a bunch of weirdos running around with guns, jumping off bridges on their YouTube-uploaded Music Video. Music Videos were very popular thirty-five years ago. In 1987 even the teachers at my middle school would put on MTV to watch "U2" videos on the school television. People were very different 35 years ago. But today, March 2022, I was having my usual anxiety attack - hoping and thinking and praying - that the black who runs my life would finally start force-feeding me the Java Software I need to add to my website ChineseNewsBoard.com. I have been repeatedly and consistently manipulated, lied to, tricked and strictly-prohibited from Java-Coding this web-site since 2018. That was only a year or two after I started the damned thing in the first place. I learned a lot of Mandarin Chinese when I was younger. I also have a news-site for learning and studying Spanish, and living in 'Little Mexico' (Dallas) I get to hear a lot of vocabulary around town, much more than I ever hear Mandarin (which is usually once or twice a year). Back in 2017, 2018, and even 2019 these black sons-of-bitches knew all about the possible "Planned COVID-19 Disease Attack" that they were going to unleash, and hoped that by the time it started, I would have given up trying to write software/code in Java (and that when this 'Great Chinese Disease' started, I would be glad to have quit Chinse News Board). Can I show you pictures of the offices that were running these broadcasts in 2018, 2019, and 2020? No I cannot. I can, though, with a straigh-face (without lying to you) relay what I hear inside my skull when these jerks brag about their abuses of power and their crime inside my skull.

So, anyway, back to the point of "those who were educated" - this is it. For people that have education, and know what the word "discipline" means as it is used in the context of education (staying focus on the subject matter, without trying to indulge in man's more base recourses like "their rolodex" and "their bank-account"), I know will suffer until the day I die, or the day I give up explaining what traditional schools use to teach. I got to listen to my master brag about "Sabotaging" people in America beginning in the 1990's as the terrorists who had grown bored of seizing the Nakatomi Plaza buildings and had begun, instead, seizing people's body parts collections (the body that God gave them) instead. I don't always get to be "me" - I get to be a collection of arms, legs, stomach ("My Tummy"), eyes and ears that is dragged around the city arguing with surveillance cameras and voice-taps, wondering what I could have done if I were a free man.

Cruelty is the hallmark of any organized-crime apparatus. Listening to to "The Beastie Boys" shout "Sabotage" on my computer about 20 minutes ago is exactly the type of things that gets the Dallas Slave-Trafficker up in the morning. It's his reason or living. Everybody who thinks they are going to be important or influential in society will be sabotaged until they have succumbed to the expectations of the crime-syndicate. Going on and on about who or what constituted the "greatest threats" to the syndicate (NDBC, North Dallas Brain Control) is exactly the type of language that makes resistance seem futile. Going on and on for hours that, for example "The Beastie Boys" thought they were a big deal thirty years ago, and that today thanks to the American Mind Control Movement, nobody on earth has ever heard of them is how to dehumanize anybody who grew up in the 1980's.

It is almost 2:00 P.M. now, and I'm in downtown Dallas at the Giant Public Library across the street from Dallas City Hall (with all of the homeless people, and the THUG-I-EST thug-cops in the city). Since 9:00 A.M. this morning when I wrote the above words, I have been agonizing to the point of total-numbness in my feet about how I can work-in the part where - these words that I'm writing - really are brought to you directly by an amalgam of the mind-filter which is my brain operating in-union / in-tandem-with the vocabulary and verbal spew machine that brain control computer operators are always forcing into me. The truth really is, for most of the past twenty five years I have not been allowed to type a god-damned thing into my keyboard, and the slave-trafficking software-control apparatus that runs Dallas has made sure that if I am in front of a key-board, I am rigorously trained to know and fear that any attempt to speak about a government-run computer-control operation having influence here, by writing about it on a web-page or e-mail, will be viciously punished and met with computer-programmed torture-software.

Only the stupid shall thrive, only the ignorant shall be paid a good salary.


Here, today, writing about mind-control and my laptop I have had to wait twenty-five years before I could use the word "electrical-implants" inside my body before I was able to do so. Oh sure, when I lived in Boston Massachusetts I was allowed to type words like "Charles River" or "Copley Square" a lot. In fact, when I was sitting in front of a Windows Machine (either at home, at the library, or elsewhere) the voices that I would listen to were invariably about such Boston Landmarks like the churches, the bridges, the scenery and "The River." Let's face it, writing about writing is a somewhat challenging task. Writing about writing and why I would want to say any of this takes some amount of effort, thought, passion, and determination and all of this is utterly obliterated when "that voice inside my head" is spewing out hate speech about black-people, Jesus, or George Bush and the War in Iraq when all I wanted to say - literally - is that there seems to be some kind of foriegn and implanted voice inside my head trying to control me!

Today, here at the library, I looked at this new "War In Russia" that is now being promoted on the Major News Networks and realize that my past several posts about Russia were planned and timed very well by the Dallas Government. I don't really know what the point or result is supposed to be, though. Me and my black boyfriend (may I call the guy currently whispering sweet nothings in my ear while I'm here at the library that?) - he mentioned I might want to take a look at Google Maps and drive down one of the streets in "The Azores." The Azores are a little group of Islands in the Middle of the Atlantic Ocean that are, sort-of, directly between Spain and Mexico. A long time ago, The Azores were a common stopping-point for the European and North-African ships that sailed the Atlantic to go to Central & America. (A few went to the present-day Southern United States). My great-grandparents from my dad both made athat journey in the late nineteenth and early-twentieth century. Not that much was spoken about it to me by my grandparents (both of whom I knew pretty well). though. Many ignorant black people of the twentieth-century would go on and on about the nineteenth-centruy Civil-War Slavery movement, without mentioning the part about 300 years of Spain and North Africa working more-or-less together.

And that's living life completely at the mercy of a though-control regime in Dallas. Absolutely none of this has anything to do with me sitting down to write Chinese or Spanish foreign-language translation software for my web-sites. And there is not a damned thing I can do about it! Trying to code a Spanish-Translator Software Application, when my ear-drums are hearing voices about Black People in Nigeria, and on "An Azore" in the Atlantic Ocean and my eye-sockets are staring at pictures of Yankee Doodle riding on his fucking poney again make it impossible to type anything, other than what they want me to type.

But today, THEY, really really really did force-feed this letter into my head. I guess I'll try to kill them tomorrow, because I kind of like this post.

Here is a road on an "Azore". It looks really neat and all. I'd love to have the money to fly to the Azorean Aeropuerto (That's Spanish for Airport) and to rent a car and drive around for a week. Sure, that'd be amazing. I don't have any money, this is so fucking obnoxious. It's literally worse than being reminded every fifteen seconds that "In 1492, Christopher Columbus Sailed the Ocean Blue." I fucking hate this country so much. 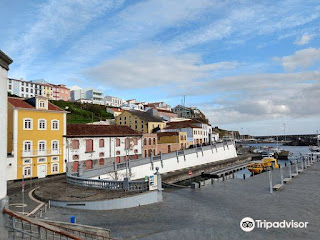