The Starbucks is watching


I am posting this from a Starbucks sitting here at Preston and Forest.  I was at home watching the Chinese news on YouTube and was thinking about posting to my blog.  I was lying in bed today listening to the chip implants in my ears trying to decide if I should try typing or talking.  Chip implants can force you to do really awful things, for example, sitting at home watching Fox News or CNN rather than getting any work done.  It's not any different than being a slave, and in fact it's quite a bit worse.  in fact when you're trying to write things you really don't even have the ability to decide what you are going to write.  It's like waiting for a monster to sit down and write an apologetic letter explaining why he is such a nightmare.  You could wait 20 years for such an event to happen. 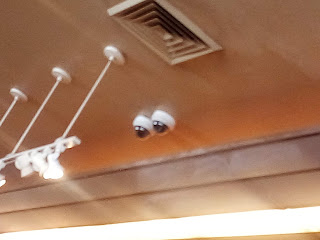 Sitting here you can see the surveillance cameras, and many years ago I used to like to waive to my "cute little Master" who is busy editing the audio video broadcast that'll be going into my eyes and ears next (from my chip implants in my body).  Not today though I'm at Starbucks instead - even though initially I had planned to go to the public computers for writing the blog but changed my mind.  My Master has been telling me I need to slow down on my daily trips to YouFit because I'm in that 40 + age group so I have been staying at home for the past week.  Earlier this week I wrote a letter to my mom about working out with these "things" in my body.
Usually letters like that end with me talking about hijacking airplanes and crashing them into New York City Skyscrapers - and this one was no exception.  at the end of this particular blog post I'll cut and paste and copy of what I wrote, but first you should probably think a little bit more about this Starbucks - and all the Starbucks - both in Dallas and in New York City.

And why?  What right do these monsters have to do this?  The reason they are so successful at running Human Trafficking Networks in Dallas using the surveillance cameras, cell-phone surveillance, and chip implants in our bodies is that they have such a large pool of uneducated masses who never went to any schools when they were younger.  The use of chip-implants to broadcast Audio and Video into our eye-sockets and our ear-drums takes advantage of people's weaknesses.  It takes advvantage our people's fears.  It takes advantage of the trust that millions had in what was many, many years ago a world power (The United States).

Promoting ignorance by insulting people in their ear-drums and eye-sockets throug a body-internal "Whisper Net" promotes a state where tens of thousands of inncoent people spend their whole lives wasting away at the most horrific jobs on earth.  Standing their flipping hamburgers so that slave-holders can drive through the drive through at McDonald's each morning as they wink at people whose minds have been under invasion.  They wink at their slaves as they pour their coffee on their way into the office towere where they control the banking system and control the cash-registers.

And look at the results!  We "as a people" whatever the hell that means - literally spent 8 years talking about the need for everybody to be in hopsitals on medicare and government health insurance.  Does "Brain Control" cause poor health?  YES!  IT does!  Obama was a complete MONSTER because of it.  He and his whore (Michelle) were on national television talking about "Obese Fat Americans" who were all eating at McDonald's - and hear in Dallas the number of functioning fast-food restaurants with chip implant Human-Meat-Slaves sky-rocketed between 2008 and 2016.  Don't get me wrong, I'm not "some kind of Reuplibican" or a "Conservative Liberal" - their words are just total useless tripe!   The words left, right, liberal and convservative are just totally meaningless to the people using them, and generally are promoted by the "Master Slave-Holding Class" PRECISELY BECAUSE they have no meaning.  There is no more perfect way to enslave a people than to pay HUGE SUMS of MONEY to complete morons who can babble about "Left vs. Right" and "Liberal vs. Conservative" while the Human-Meat is forced into every kind of human degradation and humiliation in society possible.

How much money does the "Talking Idiot Box in the Sky" (Sean Hannity, Don Lemmon, Chris Cuomo, etc. of Fox and CNN) actually make from broadcast this moronic tripe?  Remember, the word "Tripe" actually has two meanings.  One meaning is that that words which have no meaing or are empty, and the other is the "Stomach of a Cow."  How many women here in Dallas have  been enslaved into working minimum wage jobs at fast-food restaruants until they are as fat as a house, all because their is a broadcast A/V engine in their bodies that can de-rail any attempt they make to get a real education at a real college or make real progress reading books and learning at a library?
And the jobs they make in the office towers that don't house slave-traffickers are so useless anyway.

Anyways, I have been writing about my experiences at the gym because "My Master" seems to think it makes good reading.  A lot of it has been about the pain that weight lifting can cause - which I did start to help with myriad problems that can result from years of psychological and sexual abuse - both of which occur directly through the use of central nervous system control (brain control) by various and random "rapists" in the office towers.

My "little boyfriend" was giving me more pointers about doing exercise at 'YouFit' Gym.  I wake up in the middle of the night with this searing nerve pain in my feet that is so bad...

When I am listening to their little pre-recorded voice tracks in my ears while laying in my bed at night, I cannot always tell which of "the voices" I hear are from my own brain, and which voices and sounds are coming from the speakers that the government surgically inserted into my skull.

Anyway,as we all know, drugs from the opiate-family are heavily restricted and controlled these days...  I personally don't mind this since I remember the 80's, when large numbers of "Americans" were addicted to these drugs.   Nevertheless, there are times in life when Morphine really would help a person...  Going to lift weights when you are in your 40's is one of those times.

This morning, my Master in the north Dallas bank office tower woke me up at 4:30 to yell at me and call me names.  My "sciatica shooting nerve pains" started up in my feet almost immediately.  I immediately went through at least 6 different over-the-counter medicines - including the "Icy Hot" stuff that "Shaquille O'Neill" is promoting on TV.

I even went across the street to McDonald's to drink 2 large Diet Coke's.

Anyway, My Master explained that if (after putting on the pain cream) on your feet, you then use Epsom Salt to open the pores on your skin to actually "absorb" the over-the-counter pain medicines, you don't need to get prescription Morphine at all.
It actually worked good.  I started doing a "free standing squat / leg press" - and I get major pains in my body sometimes.
Brain control, and having this queer talk to me while I'm laying in bed and trying to sleep at night, however, makes me go back to wishing I could hijack airplanes and crash then into the freedom tower.